White Rhino is an outstanding hybrid that descended from White Widow with a genetic parentage from Afghanistan, Brazil & India. This Indica dominant strain has won many awards and is considered a potent smoke. The short and bushy cannabis plant was named from the main cola resembling the horn or a rhinoceros. White Rhino is best known for its massive yields. This variety is known for being particularly durable, making it able to be grown in extreme climates. Caution must be taken when sampling White Rhino as the high is considered to be a creeper, but once the high takes hold the effect is euphoric which lifts moods and numbs the body. The Indica dominance of this cannabis variety can cause users to feel tired and lazy and so the recommendation would be to use this marijuana strain in the evening or at night as the effects can be beneficial to sufferers of insomnia. The numbing effects of this strain are effective in combating chronic aches and pains whilst others find it relieves stress, anxiety, nausea, migraines and induces appetite. White Rhino is also referred to as Medicine Man in some circles and below you will find different versions from many seedbanks, all available at Original Seeds Store. 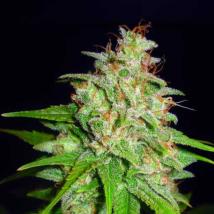