Hash Plant is an Indica dominant cannabis strain and an absolute classic. Hash Plant began it's journey in the 1980's in Holland and from there traveled to the Northwest US. Hash Plant was a renowned building block of many Sensi Seeds strains over the years, but it was rare to find the variety outside of the Cannabis Castle breeding program. The well known strain being released and reintroduced to the market by the breeders at Sensi Seeds in 1999. Hashplant, as the name suggests, is ideally suited for the production of hashish. The effects from Hashplant are usually described as deeply relaxed and some experience the phenomenon known as couch lock. This makes Hashplant a great choice for treating insomnia and it's pain fighting effects also make this strain useful in treating migraines. The high resin production, short flowering time and quick finishing of the Hash Plant cannabis variety makes her a firm favorite, especially in colder climates where the season is shorter. Although this strain is best suited to hydro set ups, Hashplant suits all indoor growing methods and can be grown outdoors in most areas with dry climates. And with Hash Plant being easy to clone, it will likely become a fast favourite at Original Seeds Store. 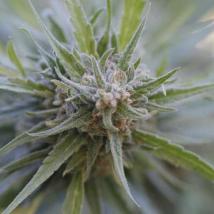