C99, also known as Cinderella 99 or Cindy, is a Brothers Grimm original, comprised of Jack Herer and Shiva Skunk, both genetics from Sensi Seeds. Now adapted and included in other strain projects by top breeders you have your pick of variations, crosses and flavours. We've collected various C99 strains, all of which are available below. C99 is a potent and long lasting, happy, uplifting strain with great reported medicinal, anti-stress and anti-depression qualities. The original C99 lineage was created from Princess (Jack Herer F2 from Sensi Seeds) x (Jack Herer x Shiva  Skunk), "cubed" by back crossing over 3 generations. There are two main phenotypes of Cinderella 99; grapefruit and pineapple. The Brothers Grimm had a favourite pheno that was known as the "Evil Pineapple" pheno and has an almost rotten meat aroma with sharp fruity nuances. The flavour of Cindy strains leans towards having acrid citrus notes and floral touches but are Haze dominant. Generally, the "Pineapple" has a complex rotten fruit with floral hints flavour, and the "Grapefruit" is similar in flavour profile to New York City Diesel, with a sharp and musky citrus flavour. 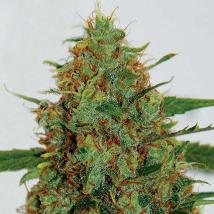